from the University of Washington Press: 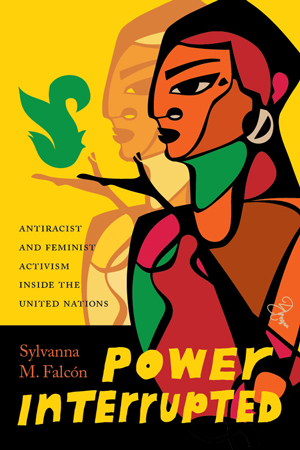 In Power Interrupted, Sylvanna M. Falcón redirects the conversation about UN-based feminist activism toward UN forums on racism. Her analysis of UN antiracism spaces, in particular the 2001 World Conference against Racism, Racial Discrimination, Xenophobia, and Related Intolerance in Durban, South Africa, considers how a race and gender intersectionality approach broadened opportunities for feminist organizing at the global level. The Durban conference gave feminist activists a pivotal opportunity to expand the debate about the ongoing challenges of global racism, which had largely privileged men’s experiences with racial injustice. When including the activist engagements and experiential knowledge of these antiracist feminist communities, the political significance of human rights becomes evident. Using a combination of interviews, participant observation, and extensive archival data, Sylvanna M. Falcón situates contemporary antiracist feminist organizing from the Americas-specifically the activism of feminists of color from the United States and Canada, and feminists from Mexico and Perú-alongside a critical historical reading of the UN and its agenda against racism.

Book Description of New Directions in Feminism and Human Rights

On the sixtieth anniversary of the Universal Declaration of Human Rights, feminists are at a critical juncture to re-envision and re-engage in a politics of human rights. Interdisciplinary feminist conversations among scholar-activists can both challenge and enrich new directions in feminism and human rights. The scholarly and activist writings that comprise this collection advance both research and critical conversations about feminism and human rights by revealing the transformative potential of a feminist human rights praxis that embraces both critique and collective justice. The editors’ method has been to move beyond a wholesale dismissal of human rights so that the book may begin new dialogues that envision transnational, gender and antiracist social justice approaches.

This book features work that engages academic critiques of human rights frameworks yet goes further by exploring the potential of human rights activism ‘from below.’ These groundbreaking chapters and conversations provide evidence of the persistent challenges and the attendant possibilities inherent in feminist human rights activism and theorizing, underscoring the creative displays of grassroots resistance by women globally and affirming transnational feminist solidarity.

This book was published as a special issue of the International Feminist Journal of Politics.

“Theoretically rich and empirically rigorous, Power Interrupted will shift the way scholars and activists think about the United Nations as a site for feminist anti-racist activism. This work represents the best of the new scholarship pushing us to think more productively about the connections and tensions between intersectionality and the transnational. Falcón shows that anti-racist feminism is challenging the UN to expand the way it addresses racism and women’s rights. A must read.”

“This book highlights an important shift in the UN discourse around race that occurred at the World Conference against Racism, Racial Discrimination, Xenophobia, and Related Intolerances but was soon overshadowed by the events of 9/11. Its analysis of the two UN agendas that began almost as parallel mandates, but came to intersect due to the work of feminists of color working in both the women’s rights and social justice arenas, makes a significant contribution to the field.”

“Power Interrupted contributes to the literature on the ways that transnational feminism is both shaping and opening new spaces of possibilities within the UN and transforming the activists and their strategies.”

-Manisha Desai, author of Gender and the Politics of Possibilities: Rethinking Globalization